Daryl (Doc) Seaman was a quiet man of action and few but pithy words. He stayed in character when he told why he became an Alberta rangeland baron on top of his roles as founder of an international oil empire and the Calgary Flames franchise in the National Hockey League.

Why did he buy the OH Ranch, taking on a big added responsibility for 20 square kilometers of grassy slopes and plains that nourish 2,000 cattle on four spreads run from a historic home in scenic foothills of the Rocky Mountains west of Longview, a 90-minute drive from his downtown Calgary business headquarters?

When asked that question the reply was a quotation from a soft-spoken president of the United States who had been Seaman’s supreme commander when he flew fighter--bombers in the Second World War. Seaman answered Dwight D. Eisenhower said it all in explaining why he maintained a historic farm on the American civil-war battlefield of Gettysburg. “Like he (Eisenhower) said, roughly this -I’ll feel good if, when I go, I leave one piece of ground better than it was before me.”

The OH that Seaman left when he died in 2009 is a seIf-supporting treasure that blends conservation, industry and a history stretching back to 1883. The operation that he strengthened with his industrialist’s resources and managerial know-how preserves the natural environment and western pioneer spirit by combining old-fashioned horseback cowpunching and modem sustainable pasture management.

Some 10,200 acres of public land under grazing leases held by the OH are involved, to make sure traditional ranching practises continue to protect the area’s native prairies. Conservation easements on the privately held OH lands will protect them for future generations.

In 2008, the 125th Anniversary of the OH, Alberta announced that one of the largest areas of native grassland in the province will be preserved through a heritage rangeland designation and conservation agreements initiated by the Seaman family. 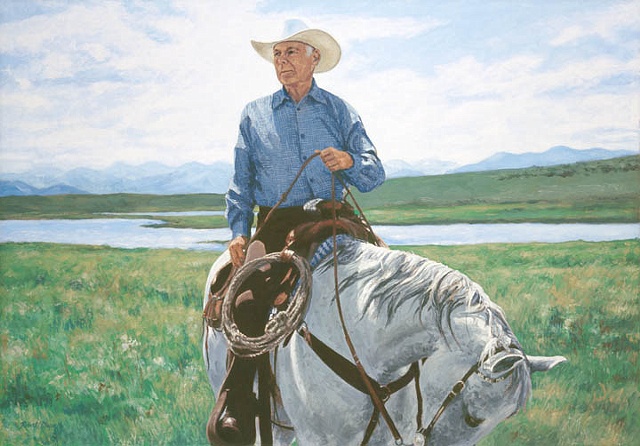 RIDING OUT AT THE OH
< previous next >